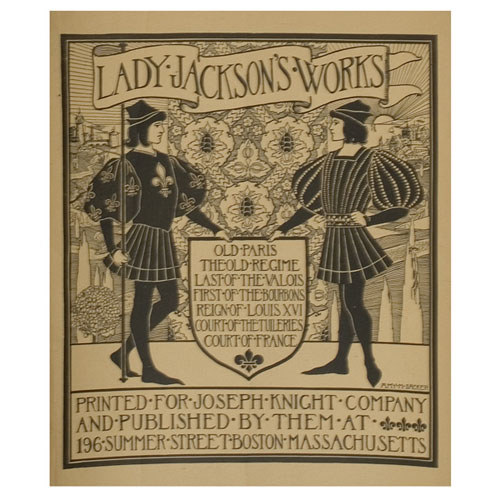 Sacker designed this poster, presumably for use in bookstores and elsewhere, about 1895, which lists several titles by Lady Catherine Jackson (died 1891).   Interestingly, in 1900, L. C. Page and Company used the left-hand figure, the banner and some other elements for the cover of  At the Court of the King, a collection of old French romances.

This was presumably a well-known work, because a book was published in Meadville, PA, in 1897, entitled

Catalogue, being a list of some few American, Dutch, English, French and Japanese posters  from the collection of Mr. Ned Arden Flood

in which this poster was listed. coincidentally, the frontispiece to this volume also represents a medieval figure, and was created by Amy's friend and colleague, Theodore Hapgood.